“Life in the park” 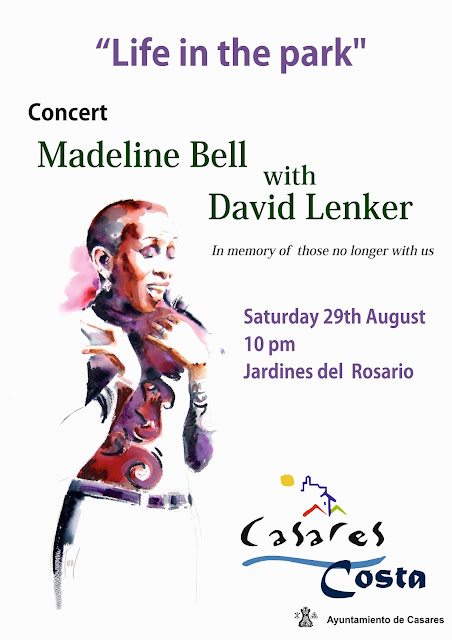 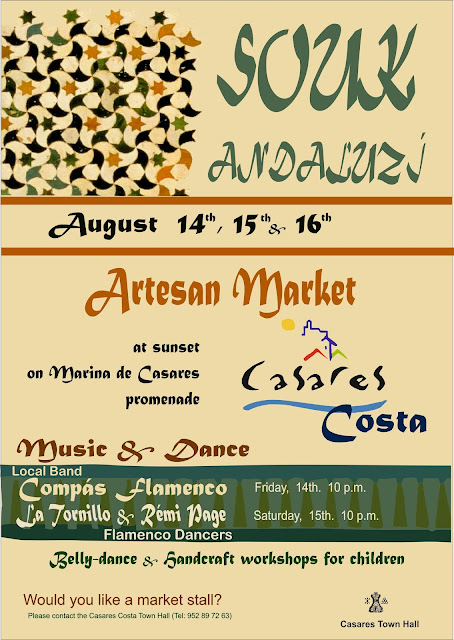 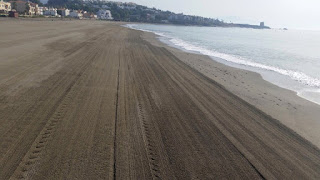 tion from last Saturday until the end of August.SOS Mediterranea is providing the lifeguard service at a cost of over 58,000 Euro. They were awarded the tender following a competition. The company are providing nine lifeguards, an emergency technician, a nurse and a co-ordinator.  They also have the necessary equipment to ensure safety on the beach including two boats, an ambulance, a quad bike and recussitation equipment. The lifeguard service is provided by the ayuntamiento to help prevent accidents on the beach or in the water, to provide primary medical care in emergencies and to inform bathers of the sea conditions. The company will also provide 2000 identity bracelets for kids to stop them getting lost and will teach two first aid courses. The lifeguard service runs from 12 noon until eight o’ clock in the evening
230 CHILDREN TO TAKE PART IN SUMMER SCHOOLS IN CASARES AND SECADERO
Two hundred and thirty children started yesterday at summer schools in Casares and Secadero. The summer school initiative is provided by the ayuntamiento to help parents cope with the stresses of the summer holiday season.This year a free bus service for the kids is also being provided and a free play area in August. 120 kids are taking part in the summer school at Blas Infante College and 110 at Los Almendros in Secadero. Children who live in Casares Costa are being taken to Casares by the free bus service. All the children will be abale to avail of a wide range of activities this summer, including sports, recreational and cultural events and theme parties. Activities are held between 9 am and 2 pm, but parents can enrol their children for morning class which begins at 8 am. The kids attending Casares can also avail of the school canteen service. The Education Council has also organised a free play activity aimed at children aged between 3 and 13 years for the month of August.

CHILDREN FROM THE SAHARA ARRIVED IN CASARES THIS WEEK TO SPEND SIMMER WITH THEIR HOST FAMILIES
The annual arrival of children from the Sahara desert to spend their summer with families in Casares started this week. Eight Saharaui children will stay with families in Julky and August escaping the oppressive conditions and heat of life in the refugee camps. Andalucia is playing host to 1300 children from the Sahara this summer under the programme Holidays in Peace. The programme is a two way street with the host families learning about life in the Sahara while the children will have a carefree summer away from the refugee life. The programme has increased the age limit for children taking part to 15 year olds this year.

A NEW VIEWING PLATFORM HAS BEEN OPENED AT PEPE LARGO
A new plaza which will provide great views of the Sierra Crestellina, the Puerto de Ronda and la Molina. The platform was built at a cost of over 43,000 Euro and funded by the ayuntamiento.

INTERNATIONAL NEWS:
Greece is preparing for a referendum on Sunday over proposed bail out terms that will end the country’s economic crisis. Opinion polls show a slight lead for the Yes side to accept the ECB terms and keep Greece in the Euro. The Greek finance Minister has said that a deal has been done regardless of the referendum outcome.

IN SPORTS NEWS:
Spanish tennis star Rafael Nadal became the highest profile casualty at this year’s Wimbledon after crashing out to a three sets to one defeat by German Dustin Brown this week. Nadal who won the championship in 2008 and 2010. Meanwhile the 2013 champion Andy Murray crushed through to the third round play offs with an easy victory over Robin Haase.

THE WEATHER FOR THE WEEKEND:
Tomorrow will be another hot and humid day with temperatures reaching 30 degrees and falling to 19 at night. Sunday will be cloudier but very warm with a high of 31 and a low of 19.

Your weekly round up of all the local news in English 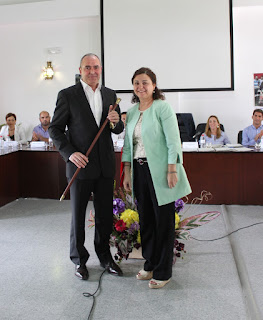 THE NEW MAYOR OF CASARES TAKES UP HIS POST

Pepe Carrasco was installed as the new mayor for Casares at a special plenary session of local councillors last Saturday. He was supported for the post by the seven Izquierda Unida councillors who were elected following the local elections on May 24th. After he was voted in outgoing mayor Antonia Morera presented him with the mayor’s baton. In his maiden speech Mayor Carrasco thanked the residents for their support and said he would be a mayor for all citizens. He praised his governing team and said they would carry out the electoral programme for the next four years. He also called on the opposition councillors to work with him to help tackle problems such as unemployment

THE GOVERNMENT TEAM IS UNVEILED AFTER THE RECENT ELECTIONS 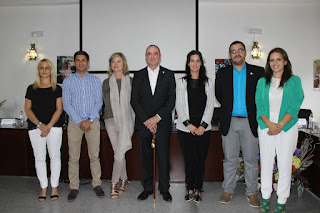 The new local government team has been unveiled after Mayor Pepe Carrasco allocated positions this week. He will take over tourism, urban planning, health services and institutional relations. Juan Luis Villalon will be the Deputy Mayor with responsibility for Secadero, communications, human resources and security. The delegate for Casares Costa and foreign residents councillor is Katy Ahrends and Antonia Pineda will be second deputy mayor with responsibility for rural development, sports, fiestas and commerce. Rocio Ruiz will take over the areas of youth, welfare, education, culture and citizen participation. Guzman Ahumada will handle local development and employment and housing. Noelia Rodriguez will be responsible for the environment and beaches and will co-ordinate with the deputy mayor’s office in Secadero.

Casares has been ordered to end its special beach for dogs at Playa de la Sal. The ayuntamiento received an order from the Environment Office of the Junta de Andalusia which said that a special dogs area on the beach was incompatible with hygiene regulations for bathing in the area. The Environment Quality Office told the ayuntamiento that it is impossible to authorise special areas for dogs on the beaches. The ban refers to the summer season and covers the period June 1st to September 30th. It said that general zones for bathers on the beaches are incompatible with dog areas because of hygiene regulations. Casares first introduced its special dog beach in August 2012 at Playa de la Sal and the idea was picked up by other ayuntamientos along the coast.

THE SECOND FILM FESTIVAL WAS A RESOUNDING SUCCESS.

The second Festival of New Andalusian Cinema was a resounding success. Along with the screenings there was a special screenwriting course which was given by award winning scriptwriter Rafael Cobos. Cassation Gala Victor Jerez won the public award while the jury gave prizes to Raices and Rabbit the mountain. In the corto express contest the winners were 321 days in Michigan and Seis y Medio. Following the ending of this year’s event, work has already begun on preparing for next year’s festival.

Various sporting events will be held in indoor soccer, seven a side soccer, volleyball and paddle tennis. Teams taking part will come from Casares, Guadiaro, San Roque and Estepona.

Six young Irish students died and seven were seriously injured when a balcony collapsed during a 21st birthday party at the Californian city of Berkeley on Tuesday. The young people were all on a special student work visa programme. Investigators are probing the possibility that the balcony was structurally defective, Flags were flown at half mast in Ireland as a mark of respect.

The US Open started at Chambers Bay in Washington State yesterday with players complaining about the hard conditions at the man made links course. World Number one Rory Mc Ilory and number two Jordan Spieth are expected to battle for the trophy but former champion Tiger Woods has been making strong preparations for the championship which ends on Sunday.

And the weather for the weekend:

Tomorrow should see plenty of sunshine with temperatures reaching a high of 27 dropping to 19 at night. Sunday should be another beautiful sunny day with a high of 27 and a low of 19.

Casares held the last plenary session of the outgoing local administration this week. The plenary session to form the next administration will be held tomorrow at the Casa de la Cultura and will be broadcast live by Radio Casares. Councillors will be seated from the oldest to the youngest and then outgoing Mayor Antonia Morera will hand over to the new Mayor Pepe Carrasco. Following the  recent local elections the Izquierda Unida will be the majorityb party with seven councillors, the Socialist Party will have four and the Partido Popular will have just two. 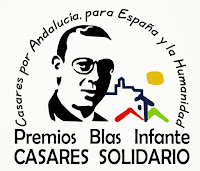 More residents than ever before are taking part in this year’s Blas Infante awards. More than 15 residents will be the jury for the 39 projects in this year’s awards and will read summaries of the projects before deciding on the best one in the international co-operation category and the in the values education category. Before the gala event on July 5th the winners will travel to Seville to meet the ombudsman. The ayuntamiento in Casares has been donating money for the past 13years to help international co-operation. This year’s awards are worth 50,000 Euro. 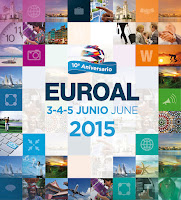 Casares took part in the 10th edition of the Euroal tourism fair in Torremolinos last week. At the event there were tourism companies, tour operators and local government leaders representing 36 different countries in Europe, Asia, Africa, America and the Far East. Casares was represented by Ecotourcasares and was part of the Costa del Sol delegation. The Ecotourcasares delegates reported that there had been a very good response at the fair to the tourist attractions of the area. 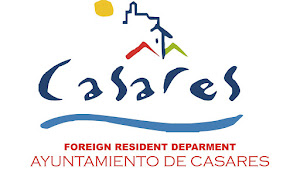 creates this blog as a new informative tool, so the neighbours are able to know directly the news generated by the local management, important news for the town and all the activities organized by the different local departments.